Teni is embroiled in a feud with her former producer, Shizzi over the rights to her hit record, ‘Case’.

Just when we thought the weekend will be boring with many postponed English Premiership games, Shizzi came through for us with a juicy gist about the silent and unaddressed feud between himself and Teni.

The popular music producer slammed Teni for reproducing her hit song, Case without his consent. A song he claimed was originally produced by him. And Teni who’s determined to end the year with a clean slate won’t even allow any of Shizzi’s claim go unattended to.

The drama started on Friday when Teni made a tweet about ‘Users’. She wrote: ‘users have no pity, they’ll use you and feel no remorse, don’t let that crown shift. Walk away”.

Dismissing her assertion,  Shizzi responded to Teni’s tweet stating that she was in no position to make such statement. 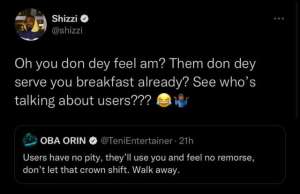 Shortly after Shizzi shared his response, gist began to fly around. Both Teni and Shizzy began to share untold stories about their relationship  which many thought ended on a good note. Their twitter spat sent the internet into a frenzy and fans began to take sides.

See below to catch some of the gists, in case you missed them 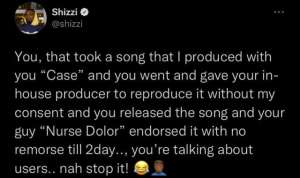 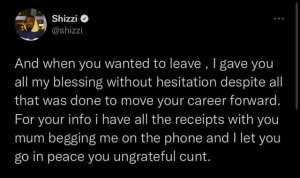 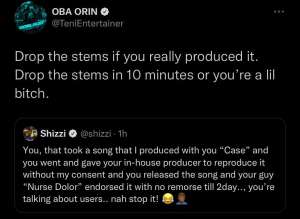 Staying true to the lyrics of her song: “I go to war for your case”, Teni took her time to give befitting responses to everyone that has a thing or two to say about the issue. Even though the case at hand is her personal case.

Shizzi’s wife was not even left out when she tried to take sides with her husband. 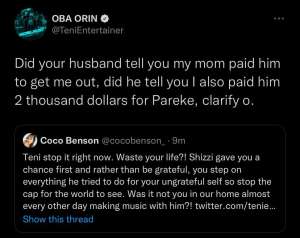 Recent developments on Teni and Shizzi’s clash has left us with some questions. First is, could there be any chance that all these is as a result of a misunderstanding from either Shizzi or Teni’s camp? Can we liken it to DJ Neptune and Rema’s case?

Secondly, who is telling the truth ? Since both Teni and Shizzi have proofs to support their claims. Then, who is the liar?

How Far Can Tems Go?