A successful music group or duo seem to be a thing of the past in Nigeria music. Today, Ajebo hustlers is defying the odds. Hopefully, they stand the test of time. The duo hold on to the pedestrian of mainstream music and more importantly, stand out truly as a group void of any form of individual dominance.

One major feat of Ajebo Hustler’s music is the in-depth lyricism. It is chunked up with relatable Nigerian content, with a fine blend of Nigerian English, patois and vernacular. For millennials, it is relatable to say they create nostalgia for the Baba Fryo and Daddy Showkey era. One that often emboldens the political, social and cultural discourse of today’s Nigeria state and times within their music space. ‘Barawo’, ‘Pronto’, ‘Yafun Yafun’ and ‘Loyalty’ are the tracks that attest to this theory. And more important, scarce of today’s general materialism, braggadocios and luxurious elements.

The humorous and appealing art of storytelling is characterised by Nigerian slang and corny wordplay. They engage their fans in-depth relatable lyricism conveyed with rhythm and rhymes, creating blur lines between highlife, hip hop, R n B, rap and afrobeats. We may find it difficult to place them at the extreme of any of the genres. Still, the sound falls in line. 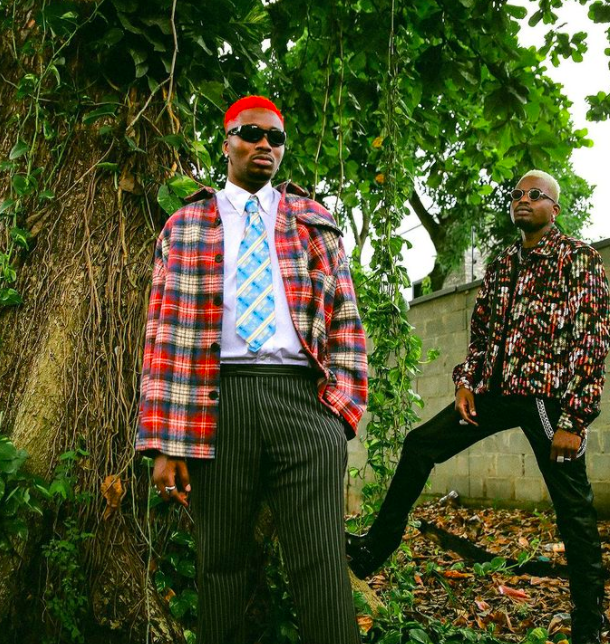 Ajebo hustlers have defied the odds in the Nigerian music space and are tearing the boundaries as a duo.

Their style has earned them street credibility courtesy to a track like ‘Barawo’ featuring Davido on the Remix. The visual was released when the youth were protesting police brutality in 2021, further reiterating its relevance. The song was about the state of the nation and the frustration borne out of it. One may think it was a coincidence perhaps some strategy to gain relevance.  Ajebo hustler is a music group with a blunt and explicit expression of what they sign about. They express it the Nigerian lingua franca undiluted. Thereby, it is easily relatable and attunes to the fans. The duo refers to the music they make as katakata music.

Ajebo hustlers is a synergy of two friends constituted by the love of music. Isaac Precious and George Dandeson whose stage names are Piego and Knowledge respectively are from River State, Nigeria where they met. The latter raps and the former does the singing and creates the sick hooks.

They met each other in 2010 and became friends while working in a restaurant. In 2014, Piego released his first single. It was in the same year, the music duo came into existence. ‘Bole and Fish’ was their first single which was successful. Music began to pay off and earned them collaboration with a heavyweight like Kayswitch.  In 2017, they released their first body of work, ‘New Skool Oldies’ EP. The project features the appearance of artistes like Yung Six, Terry Apala, Major Banks and many more. In 2021, the duo released her first studio album, Kpo Lifestyle Vol 1. They are also responsible for hit singles such as Pronto, Loyalty, Symbiosis among others.

Long live Ajebo hustler, may the synergy be forever. I wish them good luck on this tough musical journey as the forces appear to align with them. Tune in to the sounds of Nigerian best music group. And the rest is history. Hopefully in the nearest future, we will be in awe of their great artistry.

Emerging Artiste to Anticipate in 2022